Evil Portent: First Time Since 1879 Mont Saint-Michel Cut Off From Mainland After High Tide! St Michael Is Warning Us Of What Will Happen Next! 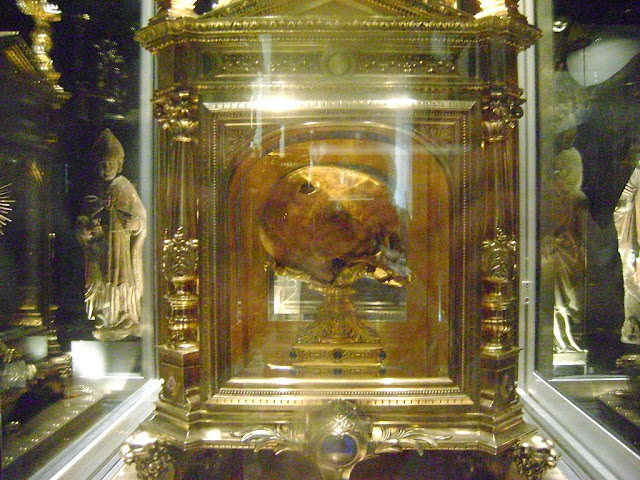 
St Michael recently allowed the abbey that was built by his request back in 708 A.D. to be cut off from the main land by high tide for the first time since 1879!

The Bishop was paid a visit by St Michael telling the bishop to build a church on a rocky tidal island at the mouth of the Couesnon. The Bishop paid no heed to the heavenly vision - so St Michael paid another visit and this time it would get the Bishop's attention! It did! Look at the above picture and see the hole in the Bishop's skull and wonder.

Bishop listened to St Michael this time and built the requested church on top the rocky island.

St Michael for those that do not know is the Angel in the vision of Sr. Lucia as written down by her at Tuy:


The third part of the secret revealed at the Cova da Iria-Fatima, on 13 July 1917.
I write in obedience to you, my God, who command me to do so through his Excellency the Bishop of Leiria and through your Most Holy Mother and mine.
After the two parts which I have already explained, at the left of Our Lady and a little above, we saw an Angel with a flaming sword in his left hand; flashing, it gave out flames that looked as though they would set the world on fire; but they died out in contact with the splendour that Our Lady radiated towards him from her right hand: pointing to the earth with his right hand, the Angel cried out in a loud voice: 'Penance, Penance, Penance!'. And we saw in an immense light that is God: â€˜something similar to how people appear in a mirror when they pass in front of it' a Bishop dressed in White â€˜we had the impression that it was the Holy Father'. Other Bishops, Priests, men and women Religious going up a steep mountain, at the top of which there was a big Cross of rough-hewn trunks as of a cork-tree with the bark; before reaching there the Holy Father passed through a big city half in ruins and half trembling with halting step, afflicted with pain and sorrow, he prayed for the souls of the corpses he met on his way; having reached the top of the mountain, on his knees at the foot of the big Cross he was killed by a group of soldiers who fired bullets and arrows at him, and in the same way there died one after another the other Bishops, Priests, men and women Religious, and various lay people of different ranks and positions. Beneath the two arms of the Cross there were two Angels each with a crystal aspersorium in his hand, in which they gathered up the blood of the Martyrs and with it sprinkled the souls that were making their way to God.
Tuy-3-1-1944


St Michael is the one who held a flaming sword in his left hand; flashing, it gave out flames that looked as though they would set the world on fire ...pointing to the earth with his right hand, the Angel cried out in a loud voice: 'Penance, Penance, Penance!'

St Michael means business notice that he burned a hole in the head of a Bishop who refuse to listen to his words, and in the above vision the same Archangel is in possession of a flaming sword! So inflamed is the sword that it appeared to the on lookers as if it would set the whole world on fire! But Our Lady interceded for the lot of us - but the flames died out in contact with the splendour that Our Lady radiated towards him from her right hand.

Now I have to ask you a question - does it look as if these Bishops listen to the words of St Michael who cried out in a loud voice: 'Penance, Penance, Penance!'


These bishop have harder heads than the Bishop who had his skull pierced by the flaming finger of St Michael the Archangel - what do you think a flaming sword of St Michael will do to these Bishops?

So to get the attention St Michael sends a very high tide  - call it his first warning. Remember that St Michael sent two warnings to Saint Autbert, Bishop of Avranches. I suppose St Michael will send another warning soon enough.

Pay attention to the feast day of Saint Autbert, Bishop of Avranches - it falls on September 10th! 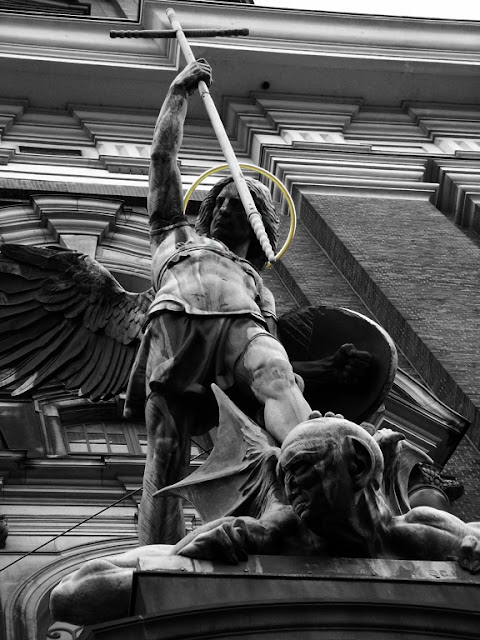 at July 28, 2013 No comments:
Email ThisBlogThis!Share to TwitterShare to FacebookShare to Pinterest
Newer Posts Home
Subscribe to: Posts (Atom)