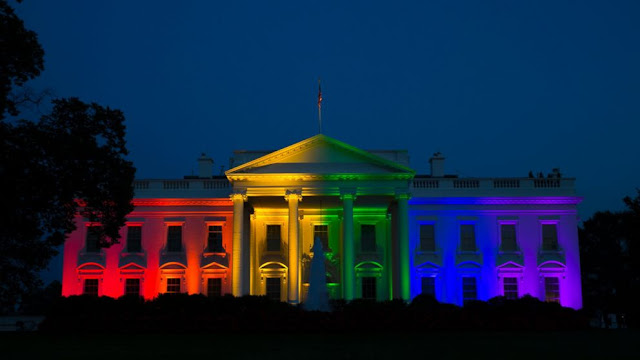 Actual WhiteRainbowHouse
at June 26, 2015 No comments:
Email ThisBlogThis!Share to TwitterShare to FacebookShare to Pinterest

Greenwood, Indiana
The Feast Of The Sacred Heart of Jesus
Friday 12 June 2015

“May the Pope guard against the performers of miracles. For the time has come when the most astonishing wonders will take place on the earth and in the air.Our Lady of La Salette 19 Sept. 1846 (Published by Mélanie 1879)

On Friday 12 June 2015 the Feast of the Most Sacred Heart Of Jesus a Crown Flash was filmed high in the skies over Greenwood, Indiana.

What is this mystery beam of light in the clouds?
A mysterious band of light has been spotted high in a cloud, appearing to look like something that is out of this world. In reality the rare event is a ‘jumping sundog’, a remarkable phenomenon that sees rapid light changes in clouds. The cause of the phenomenon is not entirely clear, but a leading theory is that it might be caused by lightning discharge in a thundercloud. This particular event was filmed above Greenwood, Indiana. In the video, the sun is obscured behind a cloud, but on the left a strange plume of light appears to continuously move over the sky. It disappears briefly on occasion before returning, sweeping downwards and jumping up again.


The scientific explanation for what is going on is almost certainly linked to an atmospheric explanation known as a sundog. This occurs when a luminous halo ring appears around the sun, when light interacts with ice crystals in the atmosphere. According to Nasa, a jumping sundog occurs when a lightning discharge changes the electric field ‘above the cloud where charged ice crystals were reflecting sunlight.’ This changing field causes geometric crystals to find a new orientation and reflect sunlight differently.Daily Mail Read More>>>>>>

Feast Of The Most Sacred Heart Of Jesus

What does this strange light portend? Don't know. Our Lady said there will be wonders in the air. Is this good for the SSPX? Probably. Time will tell.

at June 24, 2015 2 comments:
Email ThisBlogThis!Share to TwitterShare to FacebookShare to Pinterest

Washington (CNN)In an unusual sight on Capitol Hill Friday afternoon, beekeepers were called in to capture and remove about 15,000 honey bees that had swarmed around the main Senate entrance of the U.S. Capitol Building, frightening onlookers before landing in a tree. Three volunteer beekeepers, including one who is a top congressional aide, worked carefully but without protective suits to capture the queen and her thousands of offspring. The bees had been out of their nest in search of a new, larger home, according to Rachel Perry of Capitol Bee Care, an organization that works to protect honey bee colonies that, for a variety of reasons, are dying off in large numbers. Wearing just a scarf hanging over her head, Perry sat patiently beneath the tree luring the bees into a hole in a medium-sized cardboard box that was sealed with gaffers tape, gently nudging with a brush the last stragglers inside. Read More>>>>
at June 20, 2015 No comments:
Email ThisBlogThis!Share to TwitterShare to FacebookShare to Pinterest

Evil Portent! Pope Francis Declares War On The Crucifix & Vandalizes Another Crucifix! Paul VI Style Pastoral Crucifix Had To Be Taped Up With Duck Tape After Pope Francis Broke The Staff!!! 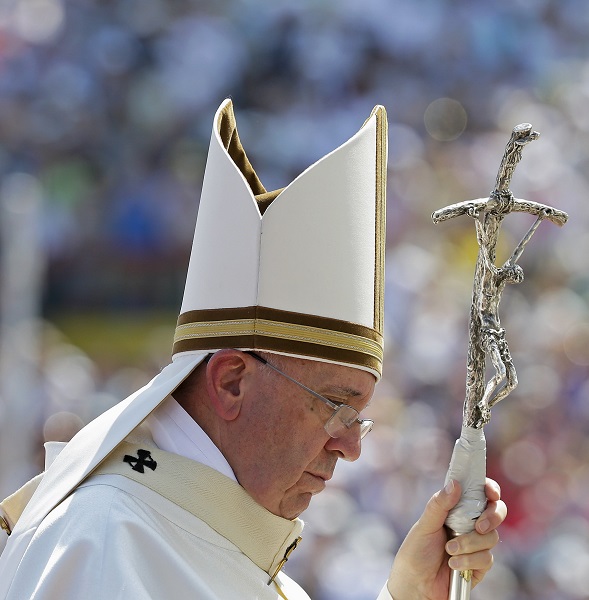 at June 07, 2015 No comments:
Email ThisBlogThis!Share to TwitterShare to FacebookShare to Pinterest

at June 06, 2015 No comments:
Email ThisBlogThis!Share to TwitterShare to FacebookShare to Pinterest

Evil Portent For Texas! Earthworms Have Been Behaving Strangely!

It will rain with a fearful hail of animals. There will be thunderstorms which will shake cities, earthquakes which will swallow up countries. Our Lady of La Salette 19 Sept. 1846 (Published by Mélanie 1879)

Since the recent storms in Texas, worms in the area have been behaving strangely. In Einsenhower State Park, for instance, rangers have spotted clumps of what they thought was discarded spaghetti sitting in the middle of the road. On closer inspection, the strings of pasta turned out to be mounds of worms, sitting in a perfect line at the centre of the road stripe.In total, the rangers discovered 30 clumps of earthworms following heavy rain and flooding in the southern US park which borders Lake Texoma. 'Even our biologist doesn't know why they're spaced so well and in the line,' Park Superintendent Ben Herman told ABC News. Daily Mail Read More>>>>>>>

at June 05, 2015 No comments:
Email ThisBlogThis!Share to TwitterShare to FacebookShare to Pinterest

at June 04, 2015 No comments:
Email ThisBlogThis!Share to TwitterShare to FacebookShare to Pinterest

at June 04, 2015 No comments:
Email ThisBlogThis!Share to TwitterShare to FacebookShare to Pinterest 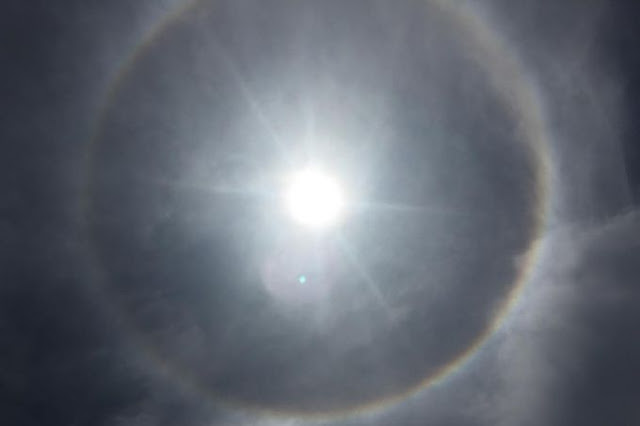 
Rome, Italy, Jun 1, 2015 / 10:30 am (CNA/EWTN News).- As the relics of Blessed Oscar Romero were brought out for veneration during his beatification Mass in San Salvador, the cloudy skies parted and a ring of light – known as a “solar halo” – appeared around the sun. “Honestly, I think this one of the most supernatural things I have ever experienced in my life,” Father Manuel Dorantes told CNA May 29. A priest of the diocese of Chicago and Spanish assistant to the director of the Holy See press office, Fr. Dorantes was present in San Salvador for the May 23 beatification of Archbishop Oscar Romero. Romero oversaw the diocese of San Salvador from 1977 until March 24, 1980, when he was shot and killed while saying Mass. In February Pope Francis officially recognized him as a martyr, and his beatification took place in his former diocese just over a week ago. The ring around the sun appeared once Cardinal Angelo Amato, prefect of the Congregation for the Causes of Saints, had finished reading the official decree proclaiming Oscar Arnulfo Romero as a martyr and a blessed, Fr. Dorantes recalled. Read More>>>>>