IRAN DOOM! Goat Enters Mosque And Runs Around During Prayer!

at July 31, 2017 No comments:
Email ThisBlogThis!Share to TwitterShare to FacebookShare to Pinterest

EVIL PORTENT FOR TRUMP? Secret Service Agent Accidentally Shoots Himself While On Duty

A Secret Service agent on Tuesday afternoon accidentally shot himself and is hospitalized with non-life threatening injuries, according to the agency. A news release from the Secret Service said a special officer assigned to the Washington field office accidentally discharged his weapon while on duty. Source
at July 26, 2017 No comments:
Email ThisBlogThis!Share to TwitterShare to FacebookShare to Pinterest

DOOM For Boston! Boston Will Hang 50 Posters To Address Public Harassment Of MUSLIMS!

In the next two weeks, the city of Boston will hang 50 posters to address public harassment and Islamophobia. The posters present "A bystander's guide to helping a person who is being targeted," with the title "ISLAMOPHOBIC HARASSMENT" in bold, capital letters on top. Illustrations depict a woman sitting on a bus or train wearing a hijab, and an angry man yelling at her. A woman intervenes, conversing with the victim until the attacker walks away. The artist employs shades of purple and blues for the drawings, making the race of the illustrated characters unclear, though the intervening bystander appears to be white. Source

at July 19, 2017 No comments:
Email ThisBlogThis!Share to TwitterShare to FacebookShare to Pinterest

at July 15, 2017 No comments:
Email ThisBlogThis!Share to TwitterShare to FacebookShare to Pinterest

DOOM! Trump & US Troops To Lead Bastille Day Parade In Paris On One Year Anniversary Of Nice Vehicle Ramming Attack

On 14 July in Nice, at approximately 22:30, just after the end of the Bastille Day fireworks display, a white 19 tonne Renault Midlum cargo truck emerged from the Magnan quarter of Nice turning eastward on to the Promenade des Anglais, then closed to traffic, near the Fondation Lenval Children's Hospital.

Travelling at close to 90 kilometres (56 mi) per hour and mounting onto the pavement as if out of control, it hit and killed numerous bystanders before passing the Centre Universitaire Méditerranéen, where it was first reported by municipal police.

400 metres (1,300 ft) from the children's hospital, at the intersection with Boulevard Gambetta, the truck accelerated and mounted on to the kerb to force its way through the police barriers—a police car, a crowd control barrier and lane separators—marking the beginning of the pedestrianised zone.Having broken through the barrier, the truck, driving in a zigzag fashion, knocked down random members of the crowd milling about on the pavement and in the three traffic lanes on the seaward side of the Promenade.

The driver tried to stay on the pavement—returning to the traffic lanes only when blocked by a bus shelter or pavilion—thus increasing the number of deaths. After reaching the Hotel Negresco, the progress of the truck, already travelling more slowly, was further slowed down by a passing cyclist, whose attempts to open the cabin door were abandoned after being threatened with a gun through the window; followed by a motorcyclist, in pursuit from the Centre Universitaire Méditerranéen, who threw his scooter under the front wheels of the truck at the intersection with rue Meyerbeer, striking blows at the driver from the running board before being struck with the butt of the driver's gun, suffering moderate injuries from falling off the truck's side.

The driver fired several shots at police from his 7.65 mm firearm, close to the Hotel Negresco,  as police arrived; they returned fire with their 9mm Sig Sauer handguns, gave chase to the vehicle and attempted to disable it. The truck travelled a further 200 metres (660 ft) until, in a badly damaged state, it came to halt at 22:35 next to the Palais de la Méditerranée approximately five minutes after the start of the attack.

That was one year ago.

Trump & US Troops will lead the Bastille Day Parade in Paris:

President Donald Trump was boarding Air Force One for Paris on Wednesday night to attend Bastille Day ceremonies and a military parade down the Champs-Elysees that will be led for the first time by U.S. troops.  About 200 troops from U.S. European Command will have the honor of leading the parade to mark the centennial of the U.S. entry into World War I in 1917. The U.S. Air Force Thunderbirds and an F-22 Raptor will also conduct a flyover of the parade.  "France stood with us during the American Revolution, and that strategic partnership endures today," Army Gen. Curtis M. Scaparrotti, EuCom commander and NATO supreme commander, said in a statement.  "On behalf of the 60,000 service members standing shoulder-to-shoulder with the French to ensure Europe is whole, free and at peace, we are honored to lead the Bastille Day Parade and help celebrate French independence," he said. Source at July 13, 2017 No comments:
Email ThisBlogThis!Share to TwitterShare to FacebookShare to Pinterest 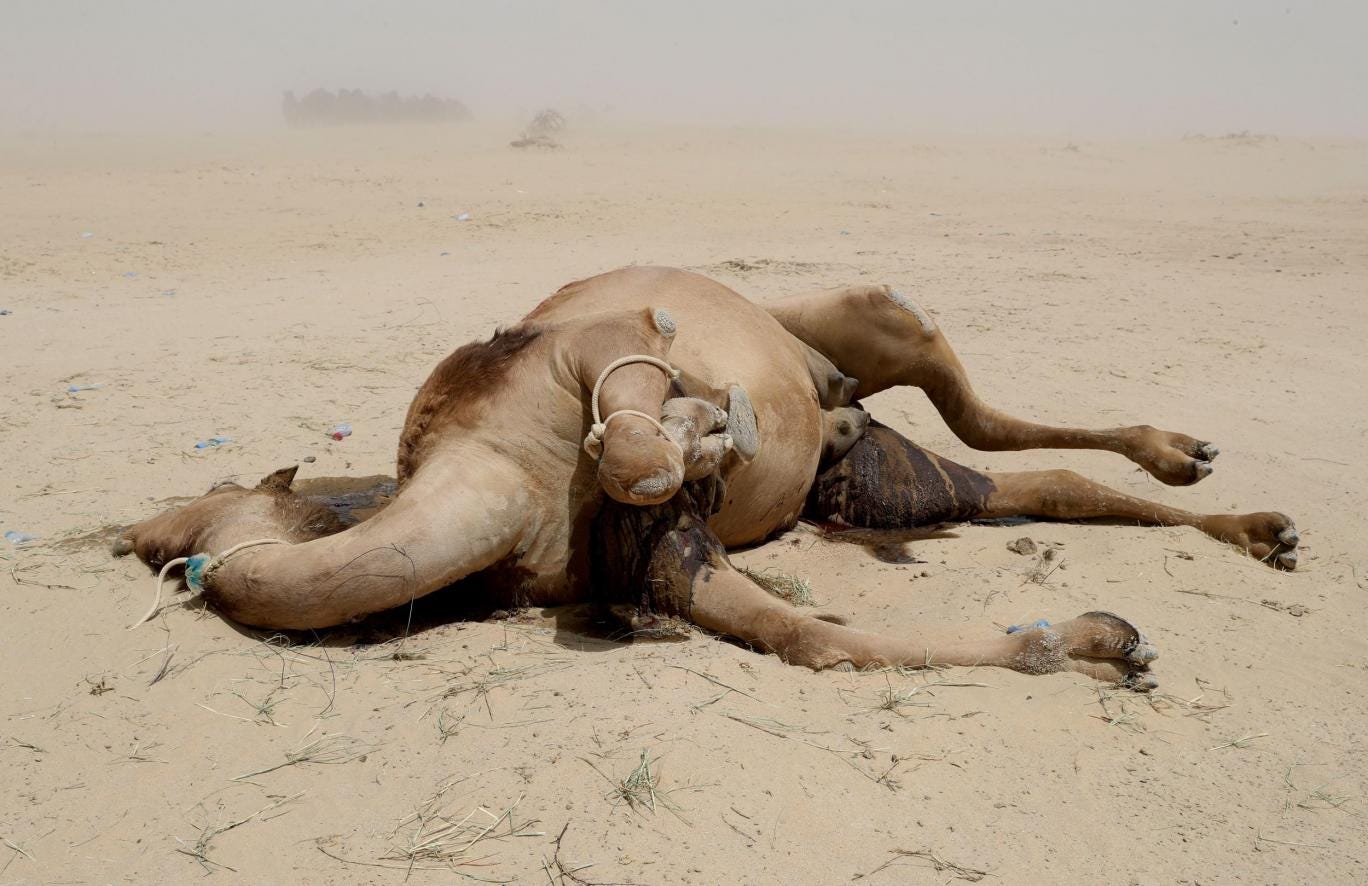 Hundreds of camels have died of thirst after Qatari farmers were expelled from Saudi Arabia during a diplomatic rift and forced to trek across the desert.Animals collapsed at the border between the two nations as only a few hundred camels were allowed to cross each day. Remaining camels were herded into huge pens and left in the heat which reached 50 degrees Celsius. Some owners said the camels were herded out en masse, and owners spent days during Ramadan trying to identify them.Other animals were left to die by the side of the road. Some farmers left immediately, while others and their animals were still travelling back two weeks after the diplomatic rift. Camel owner, Said Al Hajari said: “It was hard, the camels were exhausted because they did not know which way to go.” Camel owner, Hussein Al-Marri, from Abu Samra, said: “I have returned from Saudi Arabia. I myself saw more than 100 dead camels on the road as well as hundreds of lost camels and sheep.” Source>>>>> 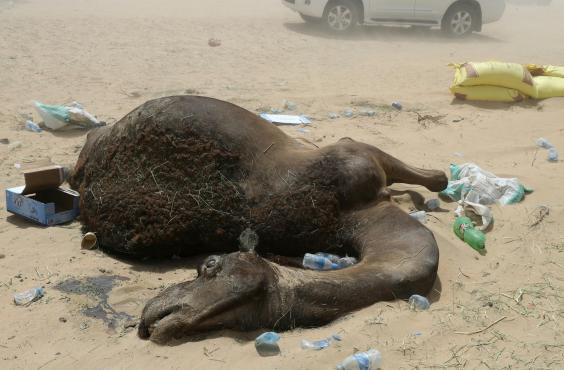 at July 12, 2017 No comments:
Email ThisBlogThis!Share to TwitterShare to FacebookShare to Pinterest

Amazon.com Inc. will acquire Whole Foods Market Inc. for $13.7 billion, a bombshell of a deal that catapults the e-commerce giant into hundreds of physical stores and fulfills a long-held goal of selling more groceries.  Amazon agreed to pay $42 a share in cash for the organic-food chain, including debt, a roughly 27 percent premium to the stock price at Thursday’s close. John Mackey, Whole Foods’ outspoken co-founder, will continue to run the business -- a victory after a fight with activist investor Jana Partners that threatened to drive him from power. Bloomberg Read More>>>>>>

Whole Foods Employee Leo Adonis, who was born Gregory Michael Ure decided to end it all by jumping into a Volcano!

The father of a 38-year-old Petaluma, Calif., man whose body was recovered by helicopter from Kilauea caldera early Sunday morning said his son left a suicide note in his backpack found Saturday night on Crater Rim Trail by a pair of visitors. John Michael Ure, who lives in Vancouver, Wash., said Leo Adonis, who was born Gregory Michael Ure, experienced “some emotional issues the last four to five years, and we’d been quite worried about it.” “He’d been working for Whole Foods in San Rafael, and he called us last weekend to tell us he no longer had a job, that he was going to be leaving to go somewhere else, and we didn’t know where,” Ure said. “Even though he’d been in Hawaii before, I didn’t think he’d be going back there.” Rangers found Adonis’ body about 250 feet below the caldera rim, in an area that is not currently erupting, at about 5:35 a.m. Sunday. Hawaii Volcanoes National Park spokeswoman Jessica Ferracane said the section of trail where he apparently jumped was between Kilauea Military Camp and Kilauea Overlook. Ure said Adonis, who legally changed his name last year, had been a woofer — an organic farm laborer usually compensated only with room and board — in Kona. Source
at July 11, 2017 No comments:
Email ThisBlogThis!Share to TwitterShare to FacebookShare to Pinterest

Famed voiceover artist who worked on the Walking Dead and commercials for Coca Cola and McDonald's dies when parachute jump goes wrong.


A world-renowned voiceover artist has fallen to his death during a skydive after his parachute became tangled and malfunctioned. Randy Schell was killed after he collided with another experienced, licensed diver during a jump at Skydive Spaceland near Houston on Saturday afternoon. It was the second jump of the day for both divers, having completed another earlier without issue, KHou reports. The second diver suffered injuries to his leg, but his identity is not known. Daily Mail>>>>>
at July 09, 2017 No comments:
Email ThisBlogThis!Share to TwitterShare to FacebookShare to Pinterest 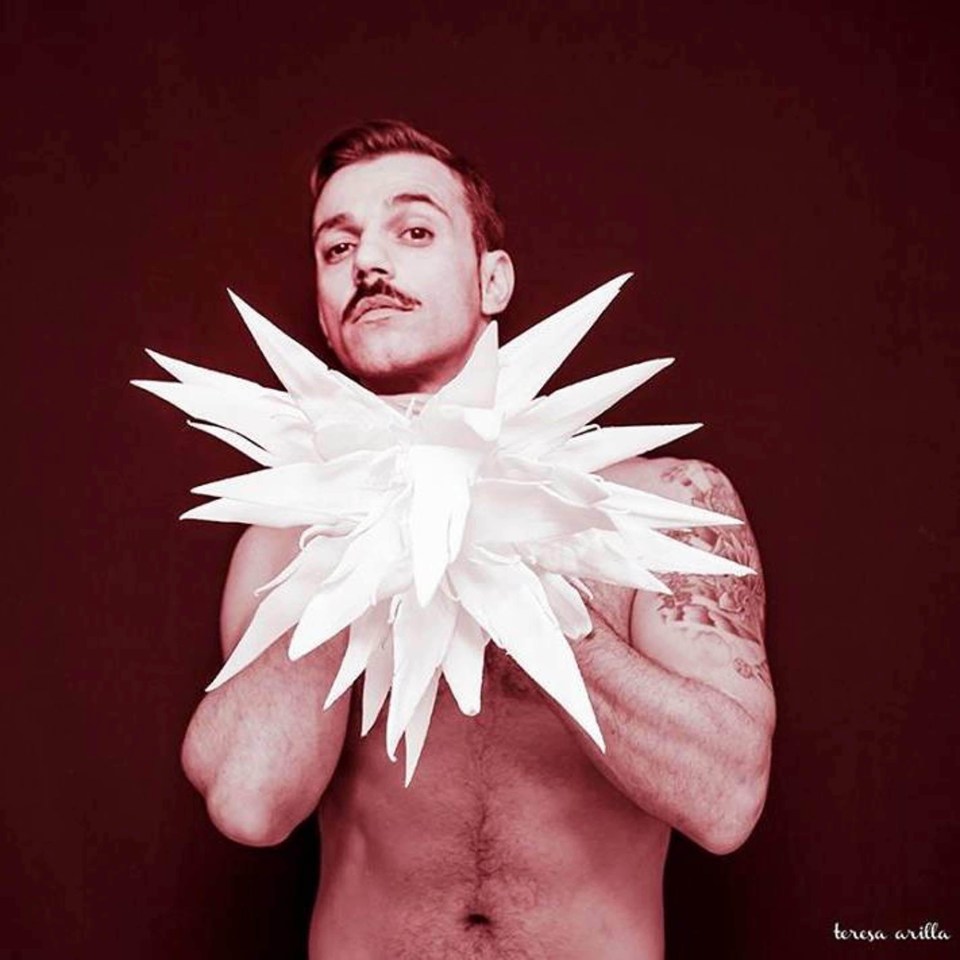 at July 08, 2017 No comments:
Email ThisBlogThis!Share to TwitterShare to FacebookShare to Pinterest

There's a new attraction for thousands of people enjoying the long holiday weekend on North Carolina's Outer Banks. Shelly Island is a destination you won't find on a standard map. The giant barrier island suddenly formed in the Atlantic Ocean, almost overnight. CBS News correspondent Mark Strassmann reports the mile-long island, which measures as wide as a football field, has attracted hundreds of tourists by boat for the Fourth of July. Pilot Larry Ihler told Strassmann the island "has definitely gotten bigger" and is "more built up." Strassmann set out by kayak on Monday to explore Shelly Island with County Commissioner Danny Couch, who is a life-long resident of the Outer Banks. Couch says he's seen barrier islands pop up before, but not like this one, which he first noticed in April. "This is the mother of all sandbars," Couch said. "All of a sudden, right here where we're sitting. It's a hoss. It's huge. It is big." The area off North Carolina's coast is one of the most dynamic ocean environments on Earth -- nicknamed the "graveyard of the Atlantic" -- with more than 2,000 documented shipwrecks since 1585. CBS>>>>>>

at July 03, 2017 No comments:
Email ThisBlogThis!Share to TwitterShare to FacebookShare to Pinterest

DOOM For Spain! 100,000 Sodomites Parade On The Streets Of Madrid 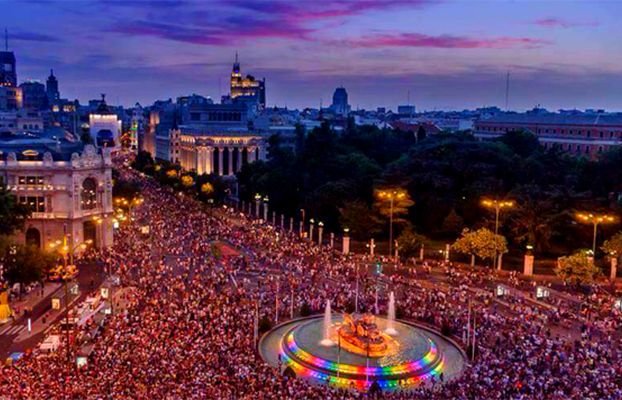