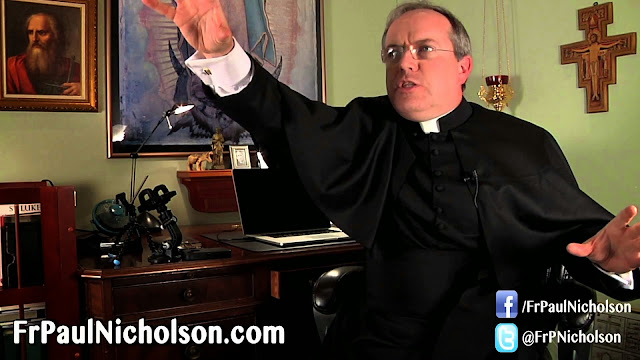 Here the tweets warning of his approach to Rome:

I am heading to Rome to shoot videos, and to pray at the tomb of the apostles. Do you have intentions for me to take to Rome?
— Fr. Paul Nicholson (@FrPNicholson) April 30, 2015

Don't get left behind! I leave on Sunday, May 3rd for seven days in Rome. Send me your petitions, and I will pray for them in Rome!
— Fr. Paul Nicholson (@FrPNicholson) May 1, 2015

Chaos at Rome Fiumicino airport after terminal fire
(BBC) Italy has cancelled dozens of flights to and from its busiest airport - Fiumicino in Rome - after a fire gutted part of its international terminal. The airport was closed for several hours but officials are working to get it fully operational again. The overnight blaze - now extinguished - gutted a shopping area at terminal three. Nobody died, but a few people were treated for smoke inhalation. Thousands of passengers were hit by delays and many flights were diverted. The fire broke out at about midnight (22:00 GMT) on Wednesday and took some five hours to bring under control. TV pictures showed the terminal engulfed in flames overnight, then the burnt-out facade in the morning. Thick smoke was seen rising from the building until mid-morning. "We got here and there was just a cloud of smoke and a terrible smell, the air was so bad we couldn't breathe. There weren't any masks or anything," said passenger Andrea Lauretti, quoted by Reuters news agency. Read More>>>>>

A fire burns today
Of blasphemy and genocide
The sirens of decay
Will infiltrate the faith fanatics......

at May 07, 2015
Email ThisBlogThis!Share to TwitterShare to FacebookShare to Pinterest