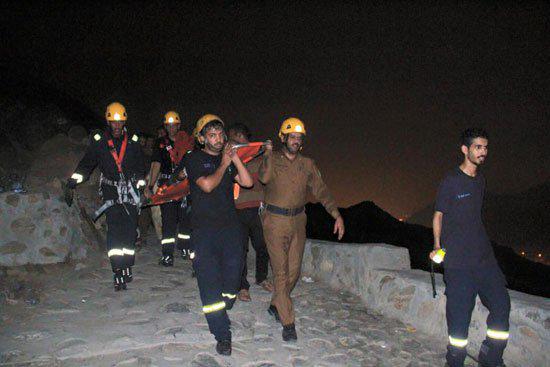 “At the first blow of His thundering sword, the mountains and all Nature will tremble in terror, for the disorders and crimes of men have pierced the vault of the heavens. Paris will burn and Marseilles will be engulfed. Several cities will be shaken down and swallowed up by earthquakes. People will believe that all is lost. Nothing will be seen but murder, nothing will be heard but the clash of arms and blasphemy. Our Lady of La Salette 19 Sept. 1846 (Published by Mélanie 1879)

Several evil portents fulfilled in Mecca within a short period of time, the first evil portent took place on 20 August - today's portent was a landslide of sorts when part of a Mountain fell on a house or two, injuring several:

#Photos from #Mecca few minutes ago. Parts of a mountain falling on a nearby building.. Reports of injuries.. #Saudi pic.twitter.com/jwxNj2AXvC
— Rami (@RamiAlLolah) September 18, 2015

EVIL PORTENT FOR MECCA FULFILLED FOUR DAYS LATER: MECCA BUILDING UNDER CONSTRUCTION SUDDENLY COLLAPSES IN THE MIDDLE OF THE STREET

EVIL PORTENT FOR MECCA FULFILLED! CRANE COLLAPSES AT MECCA'S GREAT MOSQUE, 100 DEAD....This Is What You Get When You Mess With Us......Published Friday, September 11, 2015

at September 18, 2015
Email ThisBlogThis!Share to TwitterShare to FacebookShare to Pinterest