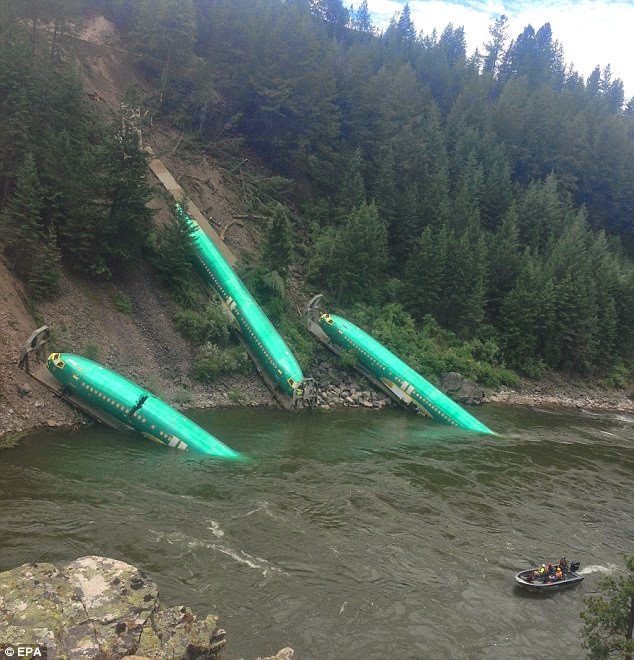 Looking like a scene from a Hollywood disaster movie, crews will attempt on Sunday to remove three Boeing 737 fuselages that tumbled down a steep bank and into the Clark Fork River in western Montana after a train derailed. Montana Rail Link spokeswoman Lynda Frost said Saturday that it's unclear the type of challenge involved because it's the first time the company has faced such a task. No one was injured when 19 cars from a westbound train derailed Thursday about 10 miles west of Alberton. The cause of the derailment is under investigation. Boeing said a BNSF Railway train loaded with six 737 narrowbody fuselages and assemblies for its 777 and 747 widebody jets derailed in Montana while en route from Wichita on Thursday. A total of 19 cars in the 90-car train derailed in the incident about 18 miles (30 km) east of Superior, Montana, said Rail Link Montana. The rail company links with BNSF to carry freight from Billings in southern Montana through the state to Spokane, Washington where it links back to BNSF. Of the derailed cars, three cars carrying 737 plane fuselages went down an embankment and into the Clark Fork River. Spirit Aerosystems, based in Wichita, Kansas, builds all of Boeing's 737 fuselages and Boeing currently produces 42 finished 737s a month. Daily Mail Read More>>>>>>
at July 07, 2014
Email ThisBlogThis!Share to TwitterShare to FacebookShare to Pinterest