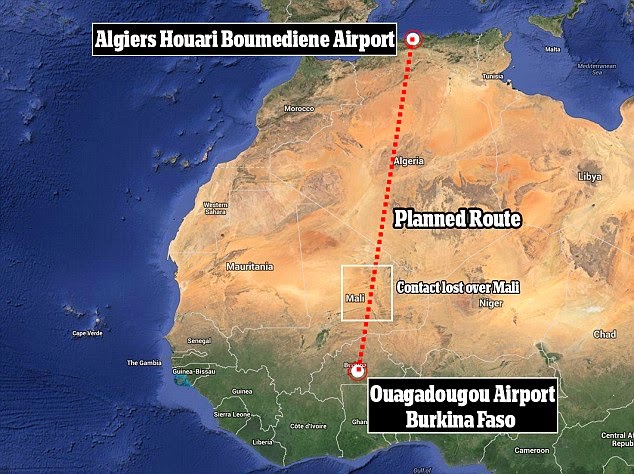 "The darksome atmosphere is as a prison to the demons until the judgment day. They carry fire of hell with them wherever they go. The devils besought the Lord not to cast them into the abyss; for they asked for this, deeming it to be a punishment for them to be cast out of a place where they could injure men. Hence it is stated,They besought Him that He would not expel them out of the country." St Thomas Aquinas

“The demons of the air together with the Antichrist will perform great wonders on earth and in the atmosphere, and men will become more and more perverted. Our Lady of La Salette 19 Sept. 1846 (Published by Mélanie 1879)

For the time has come when the most astonishing wonders will take place on the earth and in the air.Our Lady of La Salette 19 Sept. 1846 (Published by Mélanie 1879)


An Air Algerie flight that went missing en route from Burkina Faso to Algiers with 116 people on board has crashed, an Algerian aviation official said today. Air navigation services lost track of the Swiftair MD-83 around 50 minutes into the flight after the crew reportedly asked to change course due to a storm. The plane, which is operated by Air Algerie, was last picked up on radar at 1.55am GMT and should have landed in the Algerian capital around three hours later. 'I can confirm that it has crashed,' the official said, declining to give details of where the plane was or what caused the accident. Around 50 French citizens were among the 110 passengers on board, the airline's representative in Burkina Faso told a news conference in Ouagadougou, where the plane took off. There were also Spanish nationals on board, including all six of the crew. The flight path of AH5017 from Ouagadougou, the capital of the west African nation of Burkina Faso, to Algiers was not immediately clear. Burkina Faso Transport Minister Jean Bertin Ouedragor said the flight had been asked to change route because of a storm around 30 minutes after taking off. A source from Air Algerie told the AFP news agency said contact was lost while it was still in Malian air space approaching the border with Algeria. Daily Mail Read More>>>>>>
at July 24, 2014
Email ThisBlogThis!Share to TwitterShare to FacebookShare to Pinterest