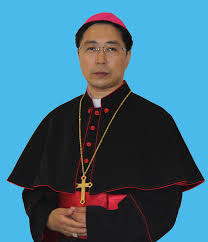 
(Vatican Radio) Father Joseph Zhang Yinlin, 44, was ordained as coadjutor bishop of Anyang diocese in Henan province Aug. 4. The ceremony at the Sacred Heart Cathedral in Anyang city was presided over by 90-year-old Bishop Thomas Zhang Huaixin of Anyang. Concelebrants included Bishops Joseph Shen Bin of Haimen, Joseph Yang Yongqiang of Zhoucun and Wang Renlei of Xuzhou, all Vatican-approved and government recognized. Bishops not recognized by the Vatican were not present at the ordination.


According to the official website of the Henan Catholic Church, the ordination Mass was concelebrated by around 100 priests, and attended by about 1,400 people, including 120 nuns. The priests who attended Tuesday's ceremony, worshippers said, including some Chinese who travelled from the US, Italy or France for the event. A few News agencies were denied entry to the ceremony.

According to a Church source, the authorities limited participants to 25 people from each of the diocese's 17 parishes.

Another source who attended the Mass told ucanews.com that those who did not have identity cards could not get into the venue. “The security check is strict as in the airport. We were being checked twice,” the source said, adding that despite the rain, the government had “hundreds of police and firemen to maintain order.”


A priest who concelebrated told ucanews.com that nearly 500 people were turned away from the Mass by authorities and had to observe the ceremony on TV sets on display in parish classrooms.

In the liturgy, Coadjutor Bishop Zhang told the congregation that he was very touched, thanked God for choosing him, a simple and weak servant. He also thanked the ordinary Bishop Zhang for nurturing, guiding him patiently for years, and now presiding at his ordination.


In April 2015, he, as the only candidate, was elected as candidate to be coadjutor bishop of Anyang diocese. A priest of Anyang diocese told AsiaNews that the ordination liturgy was “sacred, solemn, peaceful and smooth. It is a special day and full of graces.”

Born in Henan province in 1971, Bishop Joseph Zhang Yinlin studied at the National Seminary in Beijing from 1992-1996. After being ordained to the priesthood in 1996, Father Zhang served as vicar general, assisting Bishop Thomas Zhang Huaixin. He was elected as coadjutor bishop on April 29 and was approved for ordination by the Vatican.

"He comes from a very traditional Catholic family," one said of the new bishop, asking not to be named as the priests had been told not to speak to the media. "I'm glad he is becoming our bishop. He has a very deep faith and I know he will be able to accomplish his ministry well."

“This is a new beginning for Anyang Diocese,” the priest said. Today’s ordination was the first ceremony in three years and the first since the Vatican and China restarted its dialogue in June 2014.

Another Vatican-approved candidate for bishop, Father Cosmos Ji Chengyi of Zhumadian in the same province of Henan, also attended the ordination. The date for his ordination has not been announced.

Restrictions on civil and religious society have been stepped up in China since President Xi Jinping came to power two years ago. The last ordination of a bishop in China ended in turmoil, when Shanghai's newly installed Thaddeus Ma Daqin denounced the CPCA and was taken away. He has been under house arrest ever since the ceremony in 2012.

In Zhejiang province a campaign to remove crosses from both Protestant and Catholic churches has been running for more than a year, with some houses of worship demolished on the grounds that they violated building codes.

at August 13, 2015
Email ThisBlogThis!Share to TwitterShare to FacebookShare to Pinterest