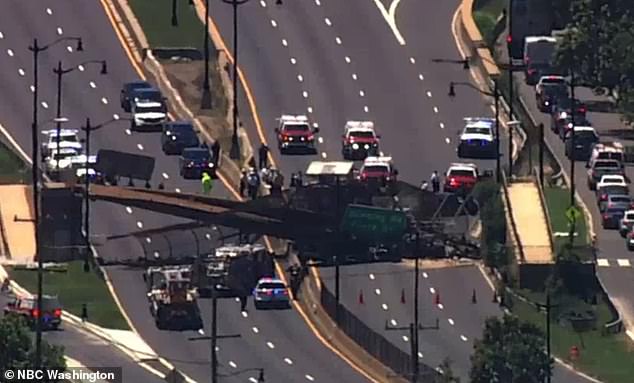 At least six people are injured after pedestrian bridge collapses onto truck on Washington DC highway
At least six people have been injured after a pedestrian bridge collapsed onto truck on a Washington DC highway. The bridge collapsed across all three lanes of the I-295 in Northeast Washington, DC at about 12.30pm on Wednesday. Four people were rushed to hospital, while two others were treated at the scene, authorities say. The truck caught underneath the bridge, which is located at Kenilworth Ave and Polk St, subsequently started leaking fuel. It wasn't immediately clear if the injured were pedestrians or drivers. Authorities, including fire and hazmat crews, worked to contain the fuel leak. At least one other vehicle was damaged after being struck by debris when the bridge collapsed. No one was trapped as a result of the collapse. Slabs of concrete and metal fencing could be seen strewn across the highway. The staircases on both sides appeared to be in tact. Authorities don't yet know what caused the bridge to crumble. In the immediately aftermath of the collapse, traffic was backed up on the interstate for more than three miles. Source
at June 23, 2021
Email ThisBlogThis!Share to TwitterShare to FacebookShare to Pinterest