DOOM On 5 FEBRUARY 2022: Let My People Go That They May Sacrifice To Me In The Desert Lest A Pestilence Or The Sword Fall Upon Us. 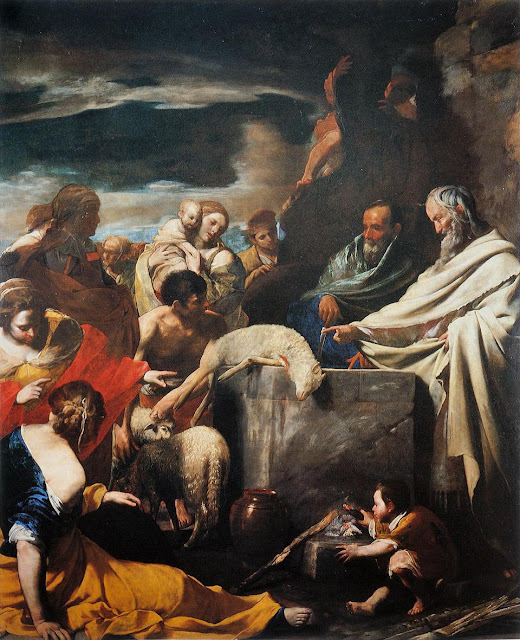 Sacrifice of Moses
Massimo Stanzione (1585-1656)
This is how we see that the stripped and barren new mass is unifying and will protect us from pestilence and the sword and famine.....maybe this is why Pope Francis is abolishing the Latin Mass to see if DOOM follows or not.
I say it does.
Update on Traditionis Custodes at St. John Cantius
In accordance with the policy of His Eminence Cardinal Blase Cupich and the implementation of the motu proprio of His Holiness Pope Francis Traditionis Custodes within the Archdiocese of Chicago, there will be changes to the schedule of Masses at St John Cantius Church. Beginning on January 25, 2022, on the first Sunday of each month, the Holy Sacrifice of the Mass will be celebrated in the Ordinary Form of the Roman Missal, both in Latin and English. The Archdiocese also prescribes for us liturgical unity of prayer for Holy Mother Church’s major feasts of Christmas, Pentecost and Easter, including the Triduum. The Canons Regular of St John Cantius are committed to serving the faithful within the Archdiocese of Chicago. We Canons will live more fully our charism, “the core of our apostolate”—our very purpose— to restore the sacred. Source
The Archdiocese also prescribes for us liturgical unity of prayer.....lest a Pestilence or the Sword fall upon us?
Just the opposite.
They want Pestilence and the sword to fall upon us. Or Pope Francis doesn't believe that the Holy Sacrifice of the Mass has such power to prevent Pestilence, Sword and Famine...etc......
Pope Francis is no better than the Pharao
After these things Moses and Aaron went in, and said to Pharao: Thus saith the Lord God of Israel: Let my people go that they may sacrifice to me in the desert. But he answered: Who is the Lord, that I should hear his voice, and let Israel go? I know not the Lord, neither will I let Israel go. And they said: The God of the Hebrews hath called us, to go three days' journey into the wilderness and to sacrifice to the Lord our God: lest a pestilence or the sword fall upon us. The king of Egypt said to them: Why do you Moses and Aaron draw off the people from their works? Get you gone to your burdens. Exodus. v.
I bet a Pestilence or the Sword or Famine or other major DOOM falls upon us on 5 FEBRUARY 2022.
The New Mass is not unifying.
What will happen on the Fifth Sunday after Epiphany?
1. Pope Benedict Dies
2. Devastating Earthquake 10 MAG Killing Millions
3. Tsunami killing Millions
4. Millions drop dead of some unexpected virus or plague
5. Start of World Wide Famine
6. Horrible Muslim Terror attack killing Hundreds of Thousands
7. Nuclear detonation killing Millions.
8. War in the Ukraine etc....
Take your pick.
Here is the Gospel reading for the Fifth Sunday after Epiphany that Pope Francis does not want to be read on Sunday 5 FEBRUARY 2022:
GOSPEL Matt. 13:24-30
At that time, Jesus spoke this parable to them, saying: "The kingdom of heaven is likened to a man that sowed good seed in his field. But while men were asleep, his enemy came and oversowed cockle among the wheat and went his way. And when the blade was sprung up, and had brought forth fruit, then appeared also the cockle. And the servants of the good man of the house coming said to him. 'Sir, didst thou not sow good seed in thy field? Whence then hath it cockle?' And he said to them: 'An enemy hath done this.' And the servants said to him: 'Wilt thou that we go and gather it up?' And he said: 'No, lest perhaps gathering up the cockle, you root up the wheat also together with it. Suffer both to grow until the harvest, and in the time of the harvest I will say to the reapers: 'Gather up first the cockle, and bind it into bundles to burn, but the wheat gather ye into my barn.' "

at January 16, 2022
Email ThisBlogThis!Share to TwitterShare to FacebookShare to Pinterest